Months of planning, preparation and prayer had taken place prior to the visit of the Australia Southern Territorial Youth Band (Bandmaster Ken Waterworth) accompanied by their special guest Silvie Paladino.

Two things had happened in the week before their arrival on Tuesday 30th May. Firstly, the people of Wales had basked in glorious sunshine and secondly members of our church had taken time to pray for each member of the group by name focusing on their tour of the UK and the impact that their music and message would leave on the people they came into contact with over the nine days on this side of the world.

Arriving after 4½ hours on the road from Bedford the glorious sunshine had long gone and had been replaced with grey sky and drizzle (after all this is Wales). Chatter and laughter filled the hall as soon as they entered the hall. Members of the church under the guidance of Major Elizabeth McCaw-Aldworth had taken responsibility for catering and the band was greeted by a lunch of hot dogs, hamburgers, salads and an array of homemade cup-cakes.

With a hectic schedule for the day ahead our friends (for that’s what they had already become) made a quick change and were back on the bus making their way to Morriston Hospital where they would present a short programme of music. Since early 2016 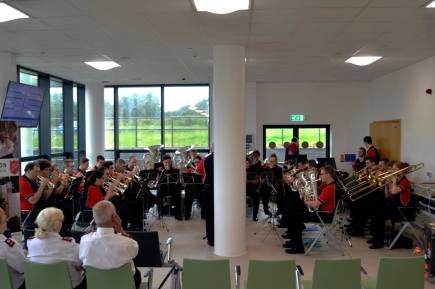 Morriston Salvation Army has taken its evening worship once a month out of the four walls of its building and relocates to the hospital foyer. The bands programme featured arrangements of well-known hymn tunes of both a lively and devotional nature along with standard Salvation Army Marches including ‘God’ Children’ (William Himes) and ‘Fill the World with Music’ (Erik Silfverberg). Members of the corps were on hand with information leaflets to speak to those listening. Staff, patients and visitors were amongst those listening and it was good that some of those connected with our church who haven’t been well in recent days made it down from wards to listen. 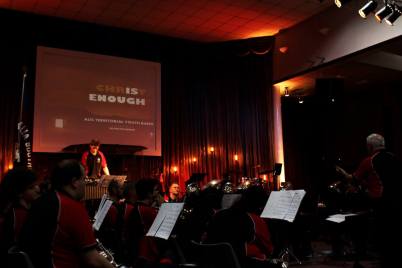 Swansea City Church where the evening programme would take place. Once unloaded and set up they used the time to run through several items to get used to the acoustic of the building also giving Silvie the opportunity to sound check with the band and sound technician.

Short trips on the bus seemed to be the order of the day as everyone returned to our own hall for an evening meal which featured more homemade desserts that visiting sections just seem to love.

The fourth and final of the short bus journeys took the band back to the concert venue where with just under an hour to the commencement of the concert those wishing to hear the band had already started to arrive. Members of local churches and corps, Salvationists from further across the South Wales area and beyond had made the way to the church for this once in a lifetime evening.

After gathering for prayer with our Corps Officers the Band and Silvie were greeted by applause as they entered the auditorium to commence the evening. Words of welcome 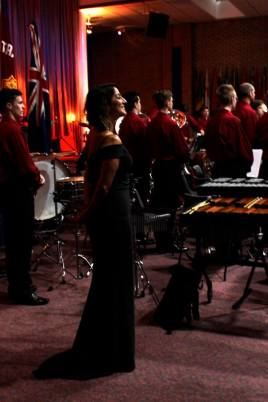 and appreciation were given by Major David McCaw-Aldworth who then invited the congregation of some 200 people to stand and welcome our guests by singing the Welsh National Anthem. Formalities out of the way and gifts presented from the corps to both Captain Matt Reeve (AUS TYB Executive Officer) and to Silvie the baton of Bandmaster Ken Waterworth brought the band to life in their opening number ‘Immeasurable’ (Andrew Blyth) which was followed by ‘Glory Hallelujah’ (Kevin Larsson). In her first contribution to the evening Silvie Paladino took to the stage with ‘Crown Him – Majesty’ (arr Brian Hogg). Some of those in the audience had had the pleasure of hearing Silvie previously during the Boundless Congress at the o2 Arena in 2015 but for others this was their first time hearing her message in song. Feet were tapping and the smiles on the faces of the audience showed all too well how they were enjoying the evening. ‘Praise to the Lord’ (Marcus Venables) was followed by ‘Fuego’ (Paul Shaman) and featured cornetists Elisha van Gaalen, Britteny Ling, Lachie Luhrs and Lucas Edwards.

Returning to the stage for two more arrangements by Brian Hogg. In ‘Almighty’ Silvie showed that he is just as comfortable with lively numbers as she is with slower devotional ones. She then shared with us something of her life, her story and her testimony of how she came to know the Lord before presenting the more devotional ‘King of Glory’.

The first instrumental soloist of the night, Jaiden Ivers hails from the Brisbane City Temple Corps on Australia’s east coast. In James Curnow’s ‘Rhapsody for Euphonium Jaiden showed a brilliance in tone and technique in his playing being accompanied sensitively by the band. Drawing the first half of the programme to a close ‘Semper Fidelis’ (which translates as Always Faithful) by Martin Cordner had been written especially for the band and their tour.

During the interval members of the band spent time chatting to members of the audience who also had the opportunity to purchase CD’s of Silvie that she has recorded with the Melbourne Staff Band in recent years.

William Himes’ march ‘God Children’ brought the audience back to their seats for the second half of the programme which continued with ‘The Kingdom is Theirs’ by Australian Sam Creamer. A young and upcoming composer his musical output is already significant and appealing to many. This lively work featured the Gowans and Larsson song ‘You Don’t Have to be Clever’ from the musical ‘Glory’. Silvie Paladino took to the stage again with two songs ‘He Reigns’ was a bright and jazzy number that the band 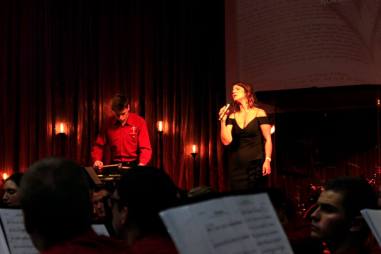 accompanied. Silvie then shared more of her testimony before a beautiful arrangement of ‘Jesus, I Love You’ (Norman Hutchings) which was beautifully accompanied on vibraphone by Brandon Waterworth. The appreciation of the words of the songs was in the silence of the audience at its conclusion. Captain Matt Reeve in his thoughts posed the question ‘where do you find your joy?’ with the answer that surely it was Jesus and encompassed the theme of the tour ‘CHRIST IS ENOUGH’. Matt’s words led naturally into the vibraphone solo ‘Everything’ (Brian Hogg) based around the song ‘Jesus, Thou Art Everything to Me’ again featuring Brandon Waterworth. The same song was the basis of ‘Enough for Me’ again from the pen of Sam Creamer.

The evening was fast drawing to a close and the bands final item of the evening was ‘Peace’ a major work from the pen of Kevin Larrson. In the opening of this work the composer introduced the Welsh tune ‘Hyfrodol’ (the reference not missed by the listener) before basing the first two movements on the theme using the Christmas carol ‘The Infant King’ with the third movement using the song ‘Peace in Our Time, O Lord’ Returning to the stage for one last time Silvie Paladino was joined by the band in ‘Amazing Grace’ (arr. Len Ballantine) which included singing from the band and lifted the listener higher and higher to the spine tingling finale. 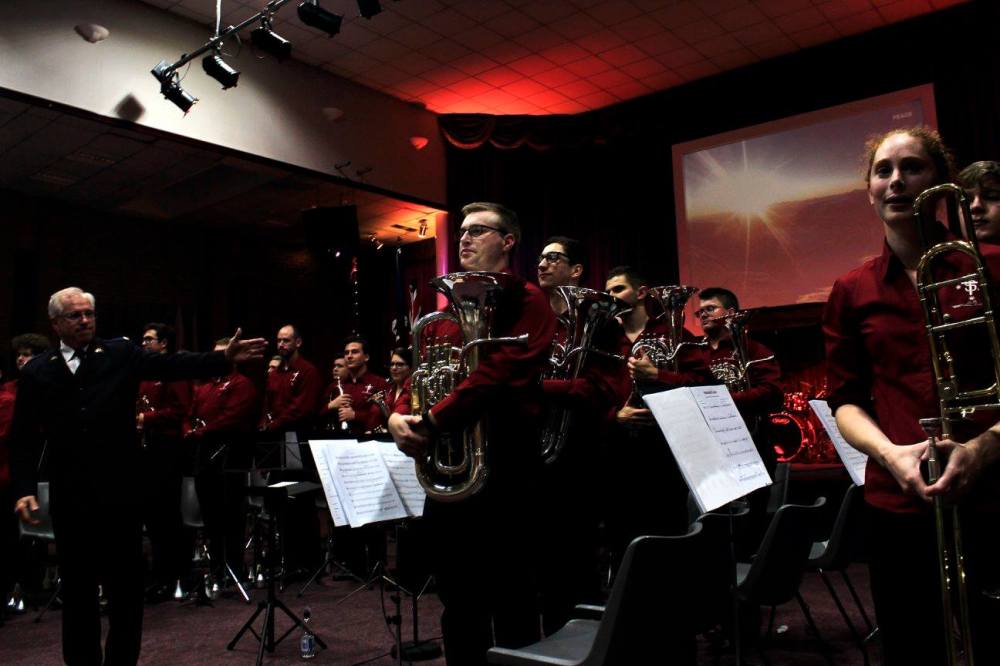 As the audience dispersed into the night the band having packed up were introduced to their hosts for the evening and taken across the city into their homes.

Wednesday morning and many tired looking TYBers returned to the hall having managed a few hours’ sleep before traveling onto Liverpool Walton Corps for the next stage of the tour. Bus and trailer loaded and farewells said between the band and the corps Major David McCaw-Aldworth prayed with the band before the band were fare welled as they were welcomed…….with song as members of the corps filled the aisle of the bus and sang ‘We’ll Keep A Welcome in the Hillside’.

In the less than 24 hours that our Aussie friends were with us we have been left challenged, inspired, blessed and encouraged by the ministry that they brought to us and our community. It’s hard to believe that a group with such a high standard of music only meets to rehears for two weekends a year. They are a credit to the work of their leaders and to the work of The Salvation Army on that great continent.

Thanks, must be paid to so many who made the visit such a success. To anyone that played any part in organising, preparing venues, helping with logistical movement of equipment, catering, taking the members of the band into their homes, and anything else that took place your contribution was greatly appreciated.