Easter has always been a special time at MORRISTON and once again this year was no different. Holy Week commenced with ‘The Place Called Calvary’ a meditation in music presented by the songsters. A selection of reflective music including the use of multi-media presentations were interspersed with bible readings and congregational songs. Major Adrian Maddern (South & Mid Wales DHQ) was the guest speaker who brought thoughts about the days after Jesus’s triumphant entry into Jerusalem, challenging the listener ‘Where is Christ? The mercy seat was used at the conclusion of the evening.

On Maundy Thursday members of the corps gathered for a meal and meditation led by Commanding Officers Majors David & Elizabeth McCaw-Aldworth culminating with a symbolic washing of hands and blessing.

Good Friday saw the band provide reflective music on the steps of St. David’s Church in Wales in Morriston’s main street to passing shoppers before joining to lead Christians from various denominations in a walk of witness through the town to Morriston Tabernacle (the largest chapel in Wales) for an open-air act of worship. Returning to the hall worship for Good Friday was led by Lieutenant-Colonels J.P & Karin Ramos (Divisional Leaders) reflecting on the agony and the love of the Crucifixion. Gathering again in the evening for worship Lt. Col. Karin Ramos used Luke 23 as the base for seven readings read by various members of the corps interspersed with song and musical offerings from the sections. The band contributed ‘It Is Jesus’ and the songsters ‘We Saw Love’ featuring Helen Mason.

Easter Sunday commenced with a good number gathering for a full breakfast at the hall.  For many years, the Songsters have presented a short programme of music leading into Easter Worship. ‘God of my Praise’, ‘Total Praise’ and Handel’s ‘Hallelujah Chorus’ rang around the building leaving no one in any doubt that Christ has risen. Worship was again led by the Divisional Leaders with morning worship catering for and involving all ages. In his message Lt.-Colonel J.P. Ramos reminded those gathered that the Easter message never changes and must be told to every generation.

In wanting to tell every generation the band and members of the corps took to the street in a March of Witness proclaiming the risen Christ. Onlookers watched and there was even applause as those inside a local cafe came out to see what was happening. 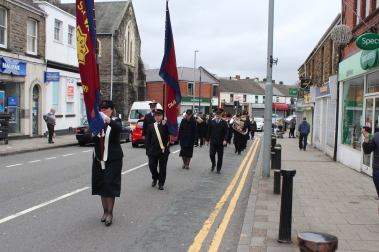 In the final meeting of the weekend the corps were joined by the congregation of St. David’s Church in Wales for an Easter Songs of Praise; hearty singing was evident as voices were raised in praise. Lt.-Colonel Karin Ramos’s thoughts were based around the women at the cross and the tomb and the importance that they had in breaking the news that Christ had risen. A week of great blessings coming to a close the roof of the building was almost raised during the final song at the singing of the words ‘Endless is the victory, thou o’er death has won’.

Much of the week was live streamed through out Facebook page.  you can catch up on events through the following links;

‘The Place Called Calvary’ An Easter Meditation in Music

Contributions from our Songsters and the Easter Sunday March of Witness can be found on our YouTube Channel;

Morriston Songsters – God Of My Praise

Photos of the weekend can be found here.