CHIEF OF THE STAFF LEADS FORWARD-LOOKING ANNIVERSARY MEETINGS AT MORRISTON

ONE hundred and thirty years of the work and ministry of Morriston Corps (church) in the United Kingdom Territory with the Republic of Ireland were celebrated across a weekend of meetings with a Welsh flavour, led by the Chief of the Staff (Commissioner Brian Peddle) and Commissioner Rosalie Peddle (World Secretary for Women’s Ministries).

Prior to a Saturday evening festival the commissioners were afforded a civic reception attended by a variety of local leaders including the Lord Lieutenant of West Glamorgan (D. Byron Lewis), the High Sheriff of West Glamorgan (R. Louise Fleet), the Lord Mayor of the City and County of Swansea (Philip Downing), Member of Parliament Carolyn Harris, Welsh Assembly Member Mike Hedges and Councillor Yvonne Jardine.

‘An Anniversary Salute’ in St David’s Church featured the South and Mid Wales Divisional Fellowship Band and Morriston Songsters. The Chief and Commissioner Rosalie Peddle were marched in behind the Morriston Corps flag as the band, songsters and congregation joined together in ‘Soldier, Rouse Thee!’ to the tune ‘Men of Harlech’.

The evening featured music associated with Welsh heritage, a passion for Christ and the proclamation of the gospel. The band played a new work by Welshman Ralph Pearce, ‘Bread of Heaven’, and the march ‘Coleg-Y-Fro’ – also known by its English title ‘Land of Song’. Songster contributions included ‘Your Grace Still Amazes Me’ and ‘More Than Wonderful’. There were also solo items by Corps Secretary Helen Mason and corps officer Major Elizabeth McCaw-Aldworth, and a Welsh male voice item, ‘Gwahoddiad’, that was full of passion.

Opening God’s Word, the Chief of the Staff brought thoughts around Isaiah 41:10: ‘Fear not, for I am with you; be not dismayed, for I am your God’, linking it to the history of the corps and to present times in light of the recent terrorist attacks in Manchester and London. Looking to the future he encouraged the corps to trust the Lord fully for strength and guidance in its mission to the community. 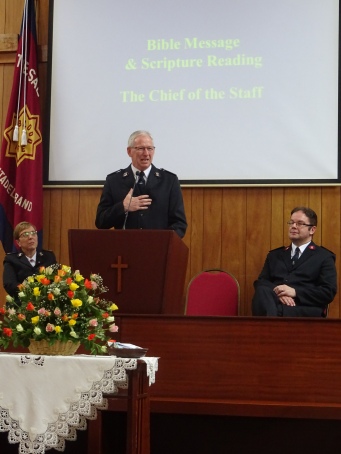 On Sunday morning, the corps gathered for all-age family worship. The Chief of the Staff gave glimpses of The Salvation Army’s work around the globe, giving insight into its advances and to areas where it still suffers difficulties. He encouraged the congregation to ‘shine as stars in the universe’ and ‘be who God wants you to be in your community’ before setting the challenge: ‘If you are faithful to God then he will be faithful to you – are you all in?’

Members of surrounding corps joined in celebration for the final meeting of the weekend, with music provided by the host corps band and songsters. Songster Jayne Knuckey testified to finding avenues of service in The Salvation Army.

In her Bible message, Commissioner Rosalie Peddle set the challenge to take full hold of God’s leading and to be consecrated for the Lord. He will do amazing things through you, she affirmed; he will equip you for every task. There were moments of personal reflection and spiritual rededication during the singing of ‘Take My Life and Let it Be’ and ‘King of Kings, Majesty’.

As the meeting drew to a close the roof was lifted, metaphorically, through the joyful singing of ‘I’ll Stand for Christ’, affirming the continuing witness of the corps.

The weekend concluded as it had started, with the commissioners sharing informally over refreshments, before the corps stood round their visitors and – in what is a local tradition – sang a Welsh blessing.