A weekend at MORRISTON with Chief Secretary Colonel David Hinton and Colonel Sylvia Hinton started with a meal at Sketty Hall, an evening of fun and fellowship included quizzes, music from the Songsters and Salvation’s Song and culminated with thoughts around lent from the Colonel.

Sunday morning saw the hall abuzz preceding worship.  Morriston Songsters sang ‘I Know A Fount’ at the commencement of the meeting before the Colonels heard the ‘hwyl’ of Welsh congregational singing.

The Y.P. Singing Group presented an item including the use of flags and Matthew Stonham used his training for this years London Marathon as the basis of the Y.P. spot and how the various bits of equipment he needs in his training can be applied in everyone’s relationship with God.  After the Songsters sang ‘I’ll Follow Thee’ Colonel Hinton spoke on Transformational 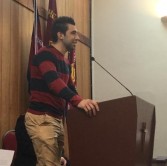 Mission (TIDE) and in particular Discipleship (Matthew 16:24) reminding listeners that the is no plan B in being Disciples of Christ and that there is always a cost through taking up the cross, having an attitude of self denial and an acknowledgement in our identity of Christ.

In the final meeting of the weekend testimony was shared by Songster Eunice Newing who spoke about her life, its joys and its regrets and how she has placed her life in God’s hands outlining her favourite verse ‘in all

thy ways acknowledge him and he will direct thy paths’.  The band and songsters supported before Colonel Sylvia Hinton spoke on 1st Corinthians 13 and thinking of the many preparations we make in life. The congregation were encouraged to share the gift of God’s love with willing hearts and hands with the assurance that his love never changes. More ‘hwyl’ was evident in the closing song ‘I’ll Stand for Christ’ before a stirring rendition of the Welsh National Anthem. The band concluded the weekend with the march ‘Emblem of the Army’.