To the strains of Wilfred Heaton’s ‘Praise’ Morriston Citadel Songsters marched into Cardiff Canton Salvation Army Hall on the occasion of celebrating 100 years of the Cardiff Canton Songsters Brigade. From the opening bars of Robert and Gwyneth Redheads ‘Good News’ it was clear that this musical celebration was going to be one not only of praise but that the singing was right from the hearts of the Songsters.

Songster Leader Chris Lear’s ‘Our King’ with the line ‘For we proclaim the Christ of Calvary’ lead to a time of prayer by Songster Secretary Simon Richardson.  Words of introduction and welcome were given by Canton Songster Secretary Claire Keats in which mention was made of the long association between Canton and Morriston and how apt it was that Morriston Songsters kicked off their Centenary Celebrations.

Andrew Maycock’s up to date arrangement of General John Gowans words ‘Everywhere’ followed which spoke about the enormity of God’s love for each of us followed by the reminder that we should give God our ‘Total Praise’.

Salvation’s Song (a small vocal ensemble) presented ‘You Raise Me Up’ followed by Tom Fettke’s beautiful setting of Psalm 8: ‘The Majesty and Glory of Your Name’ showing controlled singing and use of dynamic bringing the listener to God’s greatness. In total contrast ‘Ev’ry Time I Feel The Spirit’ set feet tapping.

‘To God Be The Glory’ gave the congregation an opportunity to stretch their legs and lift their voices in a rousing song of praise.

Oliver Cooke, an early day Songster Leader wrote the words to ‘I Know A Fount’ which would have been a ‘new’ song in 1916 the year of Canton Songsters formation.  In recent years Benjamin Harlan’s arrangement of these words have given a new lease of life to the words.  A century after Oliver Cook’s song Lanny Wolfe wrote ‘More Than Wonderful’, rarely sung by a corps Songster Brigade its lyrics again talk about the enormity of God’s Love.

Pianist Jonathan Mead swapped the piano for brass in the Flugel Horn & Trumpet Solo ‘This Is My Story’ accompanied by the Cardiff Canton Band.

In introducing ‘Your Grace Still Amazes Me’ mention was made of choosing new music to sing and how some songs take on a special significance. If there’s any song that in the last year or so has come to mean so much to Morriston Songsters as a group and also to individuals alike this is one of them.  One cannot fail to be moved by the words that in a similar way to other songs during the evening again spoke about the enormity of God’s love.

Moving to a lighter piece of music ‘Count Your Blessings’  featured regular pianist Jonathan being joined by the Songster Leader for the intricacies of the accompaniment to another old hymn given the Scott Joplin treatment by Richard Phillips.

In her testimony Songster Linda Craven spoke about tragedies and difficulties through her life and how she had pushed God away, but through the support of other members of the Songsters and her husband she had returned to faith.  She challenged the congregation with words that she had used many times ‘Is your glass half empty? Or is it half full?’

Cardiff Canton Band gave the voices of the Songsters a rest as they presented ‘Music-Maker’. Mention must be made of the bands support  throughout the evening both in their individual contribution and their accompaniment earlier in the evening to the soloist. Captain Elizabeth McCaw-Aldworth then gave the second solo of the evening ‘I’m A Soldier Bound For Glory’.

Moving into a time of reflection Andrew Blyth’s ‘I’ll Follow Thee’ referred back to Linda’s testimony.  The Songsters then moved out to stand among the congregation as they sang ‘The Christ Of Calvary’.  Songster Sergeant Cheryl Webster brought the scripture thought using aspects of her working role with customer loans in a bank to the fact that God doesn’t have a list of terms and conditions, interest charges or other penalties but that he gives you his love for free.  That indeed means it will be a ‘Happy Day’ 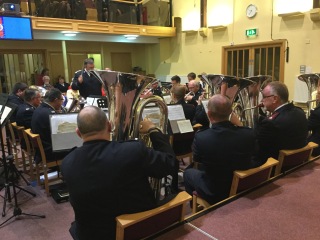 Words of appreciation were given by Canton Songster Leader Christine Saunders and everyone was sent on their way by Canton Band with the classic march ‘Rosehill’.

Thanks must be paid to those at both Canton and Morriston who planned the evening.  We look forward to sharing again in Canton Songsters Centenary when they make the return visit to Morriston later in the year.