Morriston Citadel Songsters have been really privileged this weekend to share with the corps at Darlington Citadel. Our first weekend away for a number of years and the first under our recently commissioned Songster Leader Chris Lear. The thought of a 8 hour coach journey up north was far better than expected, laughter abounded, the coach was comfy and nothing was too much for the driver who made good time. On arrival at Darlington we were greeted with a cup of tea and they never stopped feeding us until the moment we left.

A quick rehearsal for the brigade to get used to the surroundings followed by a run through for soloists and timbrels before sitting down to a three course meal.

The evening festival promised to be a great night. The hall was full to capacity, the congregation waited expectantly for what was about to be received. To the strains of ‘Men of Harlech’ the songsters marched to their places for the opening number ‘Good News’ followed by ‘Our King’ with words and music by our own Songster Leader before prayer was offered. Nerves settled (by the receptive nature of the congregation) and introductions out of the way the programme continued with links and introductions being given by individual songsters. ‘Everywhere’ and ‘Total Praise’ preceded the first solo of the evening ‘There Is a Saviour’ by Songster Helen Mason. Tom Fettke’s beautiful arrangement of Psalm 8 ‘The Majesty and Glory of Your Name was received with silence at its conclusion before a united testimony in ‘I’ve Been Changed’. Joining with the songsters the congregation showed us that northerners can sing just as well as the welsh uniting for Chris Mallett’s arrangement of ‘To God Be the Glory’. Two songs in contrast ‘I Know a Fount’ and ‘He Is My Way’ led to the second solo contribution of the night; a traditional variation solo ‘Hosanna’ on Cornet showing the skills of pianist Jon Mead were not just confined to the ivories. The newly reformed Timbrel Brigade treated us to a slick display to the march ‘Always Cheerful’. A current favourite of MCS recently has been ‘Your Grace Still Amazes Me’ (this song has the hairs on the back of my neck standing up and how I get through this song without shedding a tear I never know). Fun and smiles were evident as Richard Phillips arrangement of Count Your Blessings showcased the talents of Chris Lear and Jon Mead at the piano, and also that of the brigade with no conductor. Songster Linda Craven testified before Morriston CO Captain Elizabeth McCaw-Aldworth sang ‘I’m a Soldier Bound for Glory’. Leading into a time of reflection and a thought by Songster Sergeant Cheryl Webster the songsters prepared the minds of the congregation with ‘I’ll Follow Thee’ and ‘Power in The Blood’. With the evening drawing to a close three songs ‘O Happy Day’, ‘He Sought Me’ and ‘Midnight Cry’ brought the night to its conclusion. With one last item remaining we moved into the congregation to sing ‘The Christ of Calvary’ among them.

After a great night’s sleep and a hearty breakfast at the local Holiday Inn, we were taken to the hall. Worship was led by our CO Captain David McCaw-Aldworth (Darlington is our CO’s home corps). Three songs, ‘People Need the Lord’, God Speaks to Me’ and ‘Somebody Prayed for Me’ were used. Songster Simon Richardson testified and Songster Simon Craven read Psalm 96 before the message entitled ‘Sing A New Song’. Worship concluded with ‘We’re in God’s Army and We Fight’ accompanied by the combined forces of Darlington Band and brass playing members of the songsters, there was even a Glory March!

Lunch was a veritable feast as friendships were formed over the tables between the songsters and the host corps. 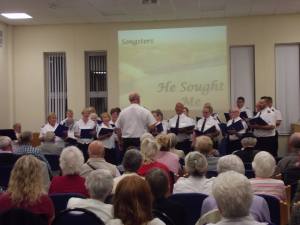 ‘God of My Praise’ opened the afternoon festival followed by ‘Lord Listen to Your Children Praying’ brought us into prayer followed by ‘I Am Praying’ and the upbeat ‘Rock Eternal’. Our small group Salvation’s Song sang ‘You Raise Me Up’ and Songster Jennifer Brown shared her testimony. to celebrate 150 years of The Salvation Army three songs of yesteryear were presented alongside PowerPoint presentations. ‘The Awakeners’ had many older members of the congregation singing along. ‘The Christian Mission’ was accompanied by timbrels and ‘From The First Hallelujah to The Last Amen’ had feet tapping. ‘The Bass in The Ballroom’ could have been classed as a novelty item as Captain David McCaw-Aldworth showed us his skill on the Eb Tuba bringing laughter to everyone. Songster Eunice Newing linked all the weekend together in her thoughts following the singing of ‘More Than Wonderful’ before we again moved out to sing ‘The Christ of Calvary’. The weekend was almost over and thanks were given. The Songsters sang their benediction ‘God Be with You’ arranged by Ash Sellers.

The weekend was filled with laughter, fun, excellent singing, testimonies and individual items and moments that lifted both listener and singer to a higher place. Mention must be made to the dedication and commitment of our Songster Leader who sets the bar high and also to our songsters who give their all. Practices have continued right through the summer without break. Also thanks must be paid to those at Darlington Citadel. We were the first section hosted in 8 years. We were made really welcome, fed till we were fit to burst and transported between hall and accommodation by a number of drivers. We will never fully know the impact we have made on the corps and all those who heard us over the weekend.

TO GOD BE ALL THE GLORY